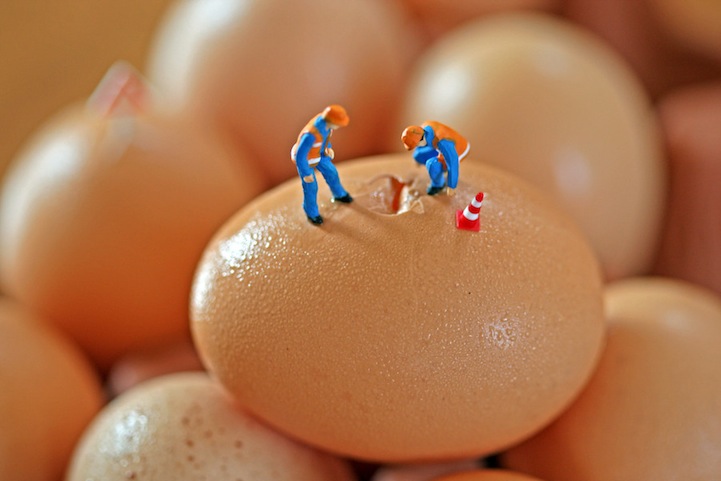 A couple sailing though a coffe-lake, a man mowing an orange-meadow or two workers desperately trying to fix a broken egg: Christopher Boffoli has created dozens of scenes like these, literally putting his tiny protagonists into the land of milk and honey.  The Seattle based artist has succeeded in telling a humorous story in each of the pictures like only few of him before. Even despisers of modern art will crack a smile, while art-experts can ravel on a meta-level of „Big Appetites“. We asked Christopher Boffoli for an interview.

Many parents teach their children not to play with food, I guess your parents didn’t do that?

This is a question I have had many times.  We have a similar saying in the United States.  Of course it is meant as a joke when this is asked of me.  I’m obviously not „playing“ with my food but „working“ with food as the elements of art.  Much of the work I am doing with very small figures can be very tedious and would not really be described accurately as play.  Conversely, the concept of play should not just be construed in the sense of wasting time.  Play can be very valuable to our development.  Just as a small lion cub learns to hunt prey by play-acting when young, play is something that can make us better.  Play should not only be relegated to children but can be used by adults to look at things from different perspectives and to generate new ideas. The idea for this series was no doubt influenced by my own childhood.  I played with slot cars and was an avid model builder.  I had an extensive collection of scale matchbox cars.  And my father built an elaborate model railroad in the basement of our house.  So I naturally grew enamored of tiny, meticulously detailed things.  There was a lot of influence from cinema and television as well.  When I was a child in the late 1970’s and early 80’s there were many films which used the concept of people shrunken down to a tiny size in a large world.  Honey I Shrunk the Kids, The Incredible Shrinking Woman, Innerspace and so on.  But the concept goes back even to the 18th century with the Lilliputians in Gulliver’s Travels.  For some reason it is a powerful, culturally recurring theme.  In a more contemporary sense, I saw a couple of artworks around 2002 that inspired me and I began to think about using tiny figures in art.  I began with a few test images and over the years continued to develop the idea.

Why did you go for food and not a different material?

I thought food would be a perfect backdrop to the work.  If you consider that the figures are essentially toys, you have food and toys as the main components of the work.  That is very powerful as it makes the work accessible to just about anyone in the world, not just those people who speak English.  Certainly, everyone is familiar with toys and food from a young age.  Regardless of whether you eat with your fingers, a fork or chopsticks, food is something that most people can talk about in mixed company without controversy.  It is very human to sit down to a plate of food.  And food is one of the first parts of a new or different culture that we experience when we travel to new countries.  Beyond all of that, food can be very beautiful.  it has stunning texture and color, especially when photographed with natural light and macro lenses.  So there are clearly many reasons why I chose edible environments for my figures. In the time since my work went viral around the world last summer, I have become aware of a few artists who are doing work similar to mine, some even with food.  Though I did not know about this work before and it did not inspire me, it does not surprise me that others are doing parallel work as the elements are so common.

Is there a long thinking process proceeding yor artworks of „Big Appetites“ or are these scenes a rather spontaneous product?

Sometimes the ideas are planned in advance.  I will get an idea and sketch it out and then will put the elements together later.  At other times I will go to the local farmers market to see what is in season.  I will choose food on the spot that looks fresh and will take it back to my studio.  I will clean it, cut and style it, and only then will begin to think about the context with the figures.  Sometimes certain figures don’t work.  I can’t find the context.  So I’ll try something else until it does work.

Do you want your art to be considered as a simple and easily accessible aesthetic pleasure or is there any deeper sense, a moral message you are aiming to transmit to the beholder? Is this art for children or for adults?

Well, most often people respond to the humor in my work first.  But there is indeed more that is intended.  Many people have downloaded and reposted my images without permission.  And when they do they take the images just for their humor and miss a lot of other facets of the work.  Each one of my images is accompanied by a caption which goes along with it.  The caption usually reenforces the humor and action in the images.  Sometimes the caption adds context that may not be self-evident, or suggests what action the figures in the images might take next.  Taken as a whole, the images and captions are intended to draw a critical eye to the relationship that North Americans have with food.  That is, the level to which we over-consume food, the way our industrialized production of food harms the environment, and the way that we have become food spectators – watching television programs about food and buying all manner of food books and periodicals and yet eating from the same prosaic menu of prepared food. But with all that said, in a sense I think too that it is not completely my job to tell a viewer what to see in my work.  For the most part they should find their own way into it.  So that is important too, to leave some room for the viewer to interpret what they are seeing.  I just hope they look closer and see more than just the obvious humor.

Where did you find these tiny plastic-figures? I’d like to have them too!

I prefer not to speak in detail about my figures.  Though I will often modify and repaint them, I generally do not fabricate them myself.  They are produced in Europe.

You do not exclusively take photos of food, however this project has obviously lead to a huge increase of your fame – not only in yor home country. Did you expect this massive positive feedback?

Yes, I started as a photographer when I was a teenager and I still do many different types of photography now, including a lot of editorial photojournalism.  The Big Appetites series was just something that I did to explore some of the cultural ideas, as I mentioned.  But I also did it for the inherent joy of creating the work.  I’d like to say that I’m clever enough to have foreseen how popular the photographs would be but I’m not.  I don’t think you can necessarily plan things like that.  I did the work for years and no one cared. And then suddenly everyone cared.  The photos have been published in 85 countries now and are sold in top galleries around the world.  It has all been a complete and welcome surprise.